Home  »  About the CCAC » Reports and Publications » Strategic Planning

Stakeholder participation has always been an essential aspect of the CCAC's programs. In keeping with this principle, the CCAC regularly and thoroughly engages our constituents in our long-term planning exercises. 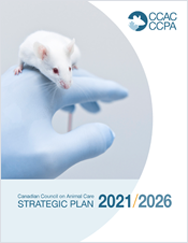 The Canadian Council on Animal Care (CCAC) is proud to present the CCAC Strategic Plan 2021-2026. The scientific landscape is shifting rapidly and the CCAC is committed to leading the way by ensuring that its high standards of animal care and its ethical practices are valued and implemented in Canadian animal-based science.

This strategic plan will maintain CCAC’s focus on the ethical care and use of animals, while fostering stronger ties between the CCAC and its stakeholders and attracting new and non-traditional entities to its programs. The plan will also facilitate program participation and enhance the quality of care for animals involved in Canadian science.

In late fall 2018, the CCAC launched a widespread survey to stakeholders to better understand the needs of our community and to garner feedback on a number of topics including engagement, communication, CCAC programs (standards, training, and assessment and certification), and overall satisfaction. A total of 322 responses in English and in French were received over a one-month period from various CCAC stakeholder groups. The CCAC also reached out to Canadians to find out what they think about the use of animals in scientific research and commissioned Nanos Research to conduct a nationwide public opinion poll to gauge the public’s thoughts about the CCAC and animal-based science in Canada.

The information garnered from these two surveys will be used to establish our priorities over the coming years, measure the value of our programs, and focus our resources on meeting the needs of our stakeholders and the expectations of Canadians.

The CCAC Strategic Plan 2015-2020 – Working Together to Enhance Animal Ethics and Care in Science is the product of considerable reflection and consultation with our stakeholders.

This plan marks a new chapter for the CCAC, mapping out where we want to be in five years, and how we will get there. It also details the key to reaching our objectives, through continual and meaningful collaboration with the CCAC's extensive community.

We look forward to working alongside this vast and diverse network of volunteer experts and partners, who together share a common goal of enhancing animal ethics and care in Canadian science.

In 2013, the CCAC embarked upon a path of renewal and growth, along which we actively reached out to Canadians. Taking stock, Canadians from coast to coast to coast were asked what they think about the use of animals in science. To gauge the general public’s thoughts and values, the CCAC commissioned a nation-wide survey. A collaborative national engagement initiative, facilitating a unique opportunity to really listen to the wide spectrum of CCAC stakeholders, was also launched and involved more than 495 individuals.

These Canada-wide consultations were the driving force behind the CCAC’s recent evolution, allowing the organization to move forward into a stronger and clearer future. These consultations also informed the CCAC five-year plan for 2015-2020.

The CCAC Five-Year Plan 2009-2014 describes the perceived needs, requirements, and expected outcomes for each business line for the current five-year period. These have been identified by the standing committees on Council and the respective program staff, based on the CCAC Five-Year Plan 2004-2009, the grant submission, and granting Agencies' response for the 2008-2011 funding cycle, and the outcome of the CCAC Forum 2008 - Building on Strength.

Concluding 18 months of constituent engagement in the CCAC's long-term planning exercise, the CCAC Five-Year Plan 2009-2014 was adopted by the CCAC Council on October 4, 2009.

Twenty-eight CCAC Council members and thirty constituents, selected for their sustained volunteer participation in the CCAC oversight system over the years, were invited to participate in a one-day forum that examined key questions relating to the development of the CCAC 2009-2014 strategic plan. This initiative, titled the CCAC Forum 2008 - Building on Strength, was held in Ottawa on October 3, 2008.

Consult the report from the CCAC Forum 2008.

On March 28, 1998, the CCAC held a one-day forum, Charting the Future, in Ottawa. Twenty-seven individuals from CCAC's Council participated in the Forum, along with twenty-eight individuals from key stakeholder groups across Canada interested in animal research, teaching, and testing.

The purpose of the forum was to draw on the expertise of participants to identify and consolidate areas of consensus on effective strategies to meet CCAC constituents' needs, and to move towards the universal application of CCAC guidelines and our program.