Harry C. Rowsell Award for Outstanding Service to the CCAC 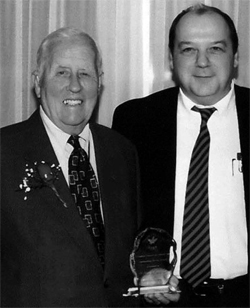 The Harry C. Rowsell Award for Outstanding Service to the CCAC was named for the CCAC's founding executive director, who devoted his life to promoting optimal care for animals in Canadian science. Dr. Rowsell's deep personal commitment to the humane treatment of animals, and his belief in our ethical responsibility for their well-being, are evidenced through the many significant contributions he made during his career. In 1988, Dr. Rowsell was recognized as an Officer of the Order of Canada for his incalculable contribution to the establishment of ethically based animal research, spearheaded by the CCAC.

Born in Toronto, Ontario, he served as a lieutenant in the Royal Canadian Navy during World War II. Upon his return, he received a Doctor of Veterinary Medicine from the Ontario Veterinary College in 1949, a DVPH from the University of Toronto in 1950, and a PhD from the University of Minnesota in 1956. In 1968, he established the CCAC and was its first executive director, a position he held for 25 years. Dr. Rowsell passed away in February 2006, and the CCAC is ever grateful for his contributions to the ethical treatment of animals in science.

For further information on the Harry C. Rowsell Award for Outstanding Service to the CCAC, please contact the CCAC at or 613-238-4031.