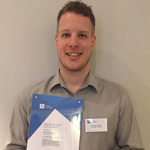 Each year the National Centre for the Replacement, Refinement, and Reduction of Animals in Research (NC3Rs) awards a prize, sponsored by GlaxoSmithKline, to highlight an outstanding original contribution to scientific and technological advances in the Three Rs, published in the last three years. A small number of highly commended entries also receive awards.

The Canadian Council on Animal Care (CCAC) is proud to announce that Dr. Michael Walker, senior research analyst at the CCAC, is a member of a team of researchers who were recently honoured with one of two highly commended awards as part of the NC3Rs 2017 International 3Rs Prize.

The prizes were awarded at a ceremony in London, England, on March 12, 2018, where Dr. Walker accepted the honour on behalf of the team and presented a poster of their work, which focuses on an experimental design called a "split-plot", that has long been recognized as a very powerful, yet little used, tool by animal researchers. Their paper empirically demonstrated that using a split-plot design (in this case, housing female mice in mixed-strain, rather than same-strain, groups, to investigate environmental enrichment effects) greatly enhanced statistical power, reduced variance in the data, did not result in welfare problems, and did not alter strain-typical phenotypes or the effects of enrichment.

Compared to housing mice conventionally (i.e. with like-strain cagemates), the split-plot design halved (or more) the numbers of mice needed for a powerful study. As this model demonstrably enhanced the power of statistical tests, while reducing the numbers of animals required, it is hoped that other researchers will be persuaded to adopt mixed-strain housing or other split-plot designs in their work. Implemented globally, such efficient designs could conservatively reduce mouse use by a minimum of 10%, or three million mice annually, with no loss in data quality.

This is the second consecutive year that a Canadian has been honoured with an NC3Rs International 3Rs Prize. In 2016, Dr. Joanna Makowska from the University of British Columbia won first prize for her research on the importance of burrowing, climbing and standing upright for laboratory rats.