Winner of the 2019 Harry C. Rowsell Award for Outstanding Service to the CCAC

The Canadian Council on Animal Care (CCAC) is pleased to announce that Dr. Douglas W. Morck, the University of Calgary's Head Veterinarian, is this year's winner of the Harry C. Rowsell Award for Outstanding Service to the CCAC. 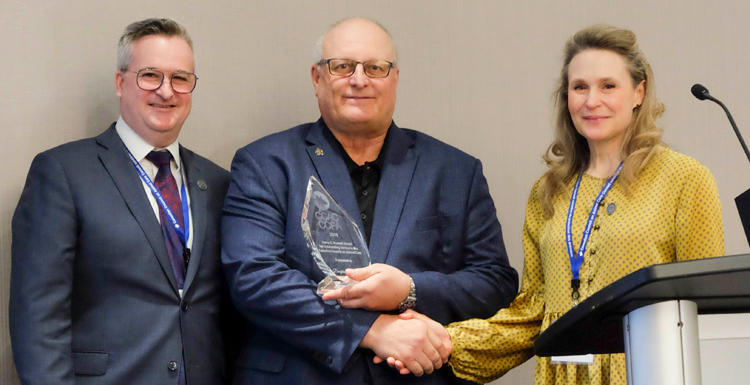 Dr. Morck has dedicated his remarkable career to enhancing and promoting the ethics and care of animals in science, underlining our responsibility as a community to strive for best practices in research, teaching, and testing activities involving animals.

Dr. Morck has been described by his colleagues as the cornerstone of animal care at the University of Calgary, and plays a key role in ensuring that the university fully complies with all provincial and federal legislation. Acting on behalf of animals in science, he spearheaded the development of the University of Calgary's Statement on Animal Care, participated in the creation of animal facilities and of the Animal Research and Education Unit that oversees animal use, and serves on both the University Animal Welfare Committee and on all of the university's animal care committees. He also reviews the animal research and teaching protocols of all faculties, and is a teacher and trusted mentor engaged in many training activities.

His valuable and insightful contributions to the CCAC over the years have helped preserve and maintain our unique oversight system for animals in Canadian science. He has served in a multitude of roles, including as an assessment panel member, as a director on the CCAC Board of Directors, as chair of the Assessment and Certification Committee, and as a member representative for the Canadian Faculties of Agriculture and Veterinary Medicine.

In addition to his work with the University of Calgary and the CCAC, Dr. Morck was also involved in the drafting of the Government of Alberta's Animal Protection Act. He has received numerous awards over the course of his career, including the 2017 University of Calgary U-Make-A-Difference Award, the 2011 Canadian Association for Laboratory Animal Science Veterinarian of the Year Award, and the 2007 NSERC Synergy Award, and was twice nominated with colleagues for the Alberta Science & Technology Award.

The CCAC relies on thousands of dedicated volunteers every year to effectively and collaboratively contribute to animal ethics and care, and to carry out our mandate. We are deeply grateful to these individuals, and would like to thank both the nominees and the nominators for this year's award for highlighting some of these outstanding individuals.

The Harry C. Rowsell Award for Outstanding Service to the CCAC is named for the CCAC's founding executive director, Dr. Harry C. Rowsell, who devoted his life to promoting optimal care for animals in Canadian science. Dr. Rowsell's deep personal commitment to the humane treatment of animals, and his belief in our ethical responsibility for their well-being, are evidenced through the many significant contributions he made during his career. In 1988, he was appointed an Officer of the Order of Canada for his incalculable contribution to the establishment of ethically-based animal research.

This highest honour given by the CCAC recognizes individuals who have made an outstanding contribution to both the goals of the CCAC and to the advancement of animal ethics and care in Canadian science through dedication, competence, exceptional performance, excellent service, and ingenuity. It is presented at the annual CCAC National Workshop Reception.